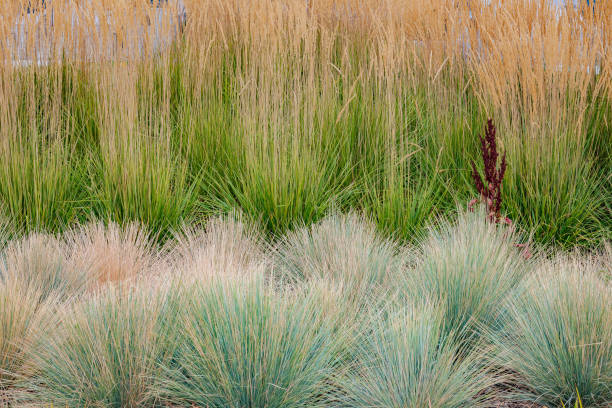 Hardiness, simplicity of maintenance, dramatic look, and a broad range of colors, textures, and sizes are all reasons why ornamental grasses and grass-like plants are popular in residential landscaping.

Grasses Come In A Variety Of Shapes And Sizes

True grasses and plants with a grass-like appearance, such as sedges, are both utilized for similar reasons in gardens as ornamental grasses.

Perennial grasses, or those that live for two or more years, make up the majority of ornamental grasses. Because of their inherent growth pattern or because they are not resilient in our area, annual grasses only survive for one growing season.

In the South, most ornamental grasses are classed as cold or warm season plants.

The development of cool-season grasses begins in the autumn or winter, and they bloom in the spring or early summer. During the summer heat, they will fall dormant or deteriorate in appearance. Warm-season grasses make up the majority of ornamental grasses for the South. During the spring and summer, they grow quickly, bloom in the late summer or autumn, and then go dormant for the winter.

Ornamental grasses range in height from up to 15 feet tall to low-growing ground cover grasses. Low mounds, fountains, and lofty verticals are all examples of grass shapes.

Many grasses have incredibly spectacular bloom heads. Flowers come in a variety of sizes, colors, and textures. Flowers and seed heads may remain for weeks or months, and there are numerous types to choose from to keep you entertained throughout the winter.

With a variety of fine to coarse textured leaf blades, gently arching or erect shapes, and rich green, blue, red or purple, yellow, or variegated leaf hues, foliage adds interest. Many grasses become a golden yellow, orange, red, or purple color in the autumn before fading to brown or straw colours in the winter.

Grasses also provide a level of interest to the garden that few other plants can. They wave gently in the breeze, adding to the landscape's attraction of movement and rustling noises. Seasonal interest is added by their quick development and changing look throughout the year.

Use In The Landscape

Because grasses are such a diverse category, they may be used in a variety of landscape settings. Accent plants might be grasses with a unique growth habit, leaf color, or flowers. They may be used to replace smaller shrubs, as well as in perennial borders and container plants. Some grasses, when planted in large numbers, may help to stabilize slope soils and prevent erosion.

Grasses are a diverse group with a variety of requirements, yet virtually all of them have certain common growth preferences. Most ornamental grasses need full light and well-drained soil. Drought tolerance is a feature of well-established sun-loving grasses. It will be easier to maintain proper drainage if they are planted on raised beds. Most grasses may thrive on regular garden soil. Sedges and rushes that look like grass will grow in damp or even wet soil.

In part to full shade, a limited number of grasses and grass-like plants will thrive. Northern sea oat grass, Japanese forest grass, and sedges are examples of shade tolerant grasses.

While many perennials thrive in the autumn in South Carolina, warm-season ornamental grasses thrive in the spring. In the autumn, cool-season grasses may be sown. Plant grasses as widely apart as their mature height will allow.

The majority of ornamental grasses are cultivated in containers. Loosen the roots around the bottom and sides of the root ball if the plants are pot-bound. The kind of grass determines how the soil is prepared. Many grasses may struggle to grow on altered soils, while others will flourish. To correctly grow any variety of grass, you must first understand what it demands. Fill the planting hole with earth, spreading the roots out and firming the soil in around the roots to eliminate air pockets. Make sure the plant's crown (the point where the roots and the top meet) is level with the soil surface. Keep the soil level the same as it was in the container as a general guideline.

After planting, water the plants well to settle the dirt around the roots. During the first several weeks following planting, pay special attention to watering. While many mature grasses are drought resistant, they need a well-established root structure to tolerate periods of drought.

Watering: Moisture requirements vary depending on grass species, soil type, temperature, and other variables once established. Most ornamental grasses need at least 1 inch of water each week from rain or irrigation to thrive. Drip irrigation is a great technique to keep grasses hydrated. It conserves water by applying it straight to the roots, as well as lowering the risk of foliar diseases.

Fertilizer: Most ornamental grasses only need a little amount of fertilizer. Any fertilizer treatments should be based on the findings of a soil test. Excess nitrogen in the soil may create disease susceptibility, excessive growth, and weak stems, causing the grass to fall over.

Cutting Back: Before the next season's growth begins, cut back grasses. Because many grasses are lovely in the garden in the winter, they are frequently trimmed back in the late winter or early spring. For the greatest look, trim stems to a few inches above ground level. Grass cutting may be done in a variety of ways. Hand pruners or hedge shears, electric hedge shears, or a weed eater with a brush-cutting blade may all be used to trim them back.

Sedges (Carex) and sweet flag (Acorus) are examples of evergreen grasses that do not return fast after being cut back. In the spring, comb the foliage of these plants with gloved hands to remove any old leaves.

Most grasses should be split every three to four years. If ornamental grasses aren't separated, they'll grow thin and die off in the middle. It's preferable to split grasses when they're little enough to handle. Digging and dividing overgrown grasses may be quite challenging.

Most grasses have robust, aggressive root systems that may need the use of a spade, saw, or ax to split. Hose off the soil to make working with the roots simpler, then separate and replant the robust growth on the clump's outer borders. Replant as soon as possible, and don't allow the roots dry up. Refer to HGIC 1150, Dividing Perennials, for further details.

Insect and disease concerns are rare in ornamental grasses. Some cool-season grasses are susceptible to rust, although most plants recover fast after being trimmed back. Anthracnose may be an issue on rare occasions. Plants with poor growth circumstances, such as little light, poor air circulation, or excessive fertilization, are more susceptible to disease.

If planted in the incorrect place, a few grasses, such as runaway or prolific sowing non-native grasses, may become pests. Conceal the root structure of flowing grasses in a deep bottomless container to keep them under control. Use non-native grasses that seed aggressively with caution, particularly near natural or wetland regions.